Elizabeth (Lowell) Blake Everett was born on 21 November 1803, in Boston, Massachusetts to parents Thomas and Mary (Barnard) Blake. She married Otis Everett on 25 October 1827 and lived in the South End in the house built on Blake’s Court by her father, Thomas Blake. We do not know the circumstances which brought Elizabeth and Otis Everett to making their home there but they stayed until 1858 when they sold the house on Blake’s Court. The family moved to 478 Shawmut Avenue and the houses on Blake’s Court were demolished to make a public highway and an extension of Union Park Street in 1860.  Elizabeth gave birth to and raised four children: Otis Blake Everett, Thomas Blake Everett, Louisa Everett, and Percival Lowell Everett.

Close up of the marriage record of Otis and Elizabeth.

For women, a move into the middle class meant a change in their gender roles and an emphasis on the home. Industrialization shifted work away from the home for working and lower class women, and combined with the decline of the agrarian society, a powerful new ideology emerged that place upper and middle class women in the domestic sphere. Juxtaposed against the public sphere for men, who engaged in work, politics, and socializing outside the home, women were expected to engage only in homemaking and childrearing. Because of the increase in goods available for purchase and the increased purchasing power of the middle class, the domestic sphere was no longer the site of production for family survival, but a place of leisure.

The domestic sphere became the place for home and consumerism. While middle class men labored in their non-manual labor jobs, their wives labored by shopping for the house, producing clothes for their husbands and children, cleaning the house, and educating the children. Women, such as Elizabeth Everett, sought advice from magazines like  Godey’s Lady’s Book  to tell them how middle class women were supposed to

Image of a dress featured in Godey’s Lady’s Book in 1859. Image courtesy of Corinne Bermon

navigate the different aspects of life, the tensions between the two spheres, and between their individual interests and societal good.  Godey’s  gave women the knowledge they needed to perform their domestic roles better by giving advice on childrearing, managing finances, and fashion. In Boston, the ability to buy cheap, imported cloth was made easy by the merchant trade the Everetts engaged in and Elizabeth Everett surely looked to  Godey’s  for the newest fashions for her clothing.

Elizabeth Everett did not hesitate to call upon son, Otis Blake, in her letters to him to ask for specific goods, especially silks and wools for clothing, for her and the extended family.  A middle class woman learned from  Godey’s  that women consumers had the obligation to find the best price possible and the Everetts had the advantage of not having to go to other merchants to obtain items that Percy or Otis Blake could get easily in their overseas appointments. On 17 January 1852, Elizabeth wrote to Otis Blake in Calcutta to request him to procure scarlet cashmere for his Aunt Sarah:

“…Aunt Sarah Ann wished me to ask you if you would procure for her 2 1/2 (two yard and a half) yards of plain scarlet cashmere and a quarter wide (1 1/4). She does not care about the finest quality but would like the best you can get from 6 to 10 dollars per yard.”

Throughout her life, it seems that Elizabeth lamented the loss of her daughter, Louisa, at age seven. Louisa is not directly written about but is alluded to in several letters from Otis Blake. In his 15 December 1854 letter, he calls Thomas’s new wife Sarah Greene, as “near a relation as an own daughter” and that the young couple bring Elizabeth “comfort and pleasure.”

Elizabeth also began donating money to the New England Female Medical College in the early 1850s and continued until the school merged with the Boston University School of Medicine in 1874. Although Elizabeth does not mention women’s rights in her letters, the act of donating to the only all-female medical school in Boston shows her support of young women abandoning the domestic sphere and a firm commitment to women’s education. 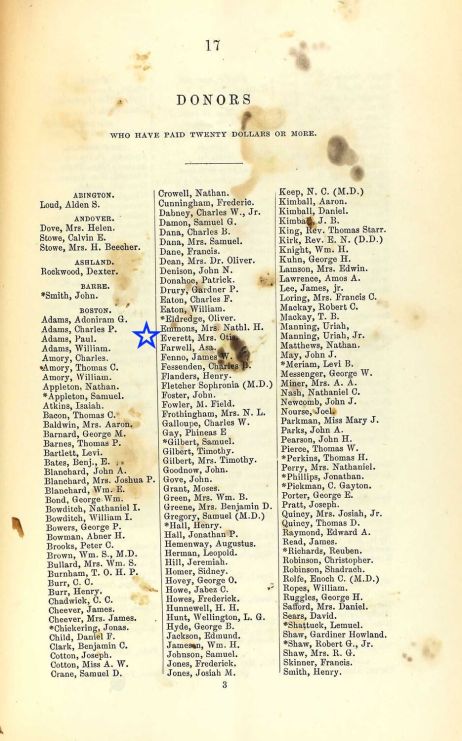 A page from the New England Female Medical College annual report citing Elizabeth Everett’s donation in 1860. The entire annual report is available on the Internet Archive through Ancestry.com.

Next: Upstairs, Downstairs: Class Distinctions in the mid-19th Century