The rich, white elite from the East India Company dominated Calcutta in the 1850s and Otis Blake Everett attempted to keep up with the conspicuous consumption that surrounded him. As he moved from one rental in town to more sumptuous surroundings he noted to his mother on 3 April 1854 that his new rental had

“four large rooms on the lower floor, and three on the second, with a large piazza running round both stories. There is about half an acre of land, which is being laid out handsomely with paths & flower beds. There is a stable for three horses, & a carriage house. The cook house is, as they always are here, separate from the house.”

Otis Blake never specifically names the section of town to which he moved but his description of his new home and, in later letters, his neighbors shows that he lived in the an area meant for the American and British merchants living in Calcutta for business.  This section of town which took up a considerable amount of Calcutta became known as “the white town.” White town was dominated by the men who worked for the East India Company and was rife with the arrogance and racial exclusiveness as these merchants viewed themselves a culturally and racially superior to the Indian men and women they came into contact with.

In white town, Otis Blake enjoyed a full social life with other merchants, both British and American alike. A staple for Otis Blake and his cohort was the dinner party. It was in each other’s homes that these young merchants could relax and enjoy the company of each other with the wives and daughters of their peers in their acquaintance. Otis Blake wrote often to his parents about his social activities, probably to quell their fears that he was languishing alone in India. He also made mention of his female acquaintances in order to reinforce his balanced social circle to his parents.

16 August 1854: “There was a large nautch [entertainment mainly consisting of dancing by professional dancing girls called nautch girls.] given here a few days ago by Aushootos Day. Nearly all the Americans were there. It did not amount to much, in fact. After you have seen one nautch there is not much interest in another. I went to a sort of a picnic to a large garden, called the Seven Tanks, a few days ago, and had a very good time. Once in a while I find some amusement between the showers, but it is very dull here at this season of the year.” Image courtesy of the South End Historical Society.

6 November 1854: “I have made lots of acquaintances among the ladies in our neighborhood, and they keep me going to parties and dinners about twice a week. Some of them have been teasing me lately about a very pretty young lady and say my attentions are very marked, but I shall take good care not to get caught[…]” Image courtesy of the South End Historical Society

“[…]I presume you can hardly imagine my being quite a beaux among the ladies, but it is about all the amusement a poor fellow can have in this place. Next week we are going to get up a garden party and have a dance and tiffin in the Company’s gardens.” Image courtesy of the South End Historical Society.

White Calcutta denizens, like much of their British and American counterparts, enjoyed theater and multiple theaters were erected around the city. Shakespeare was a staple and the casts were made up of local talent from white town and increasingly by the 1850s, professional actors and actresses traveled to Calcutta to give performances.

One particular actress Otis Blake was excited about seeing in Calcutta was Kate Hayes. Hayes was an Irish born Italian opera singer who became a sensation after she debuted at the Italian Opera in Marseilles in May 1845. Hayes became famous in Europe and America as the most sought after singer and even performed for Queen Victoria at Buckingham Palace. So when she traveled to Calcutta to perform, it is not surprising tickets were much sought after. He notes in his 21 January 1855 letter to his mother:

21 January 1855: “Calcutta is quite lively just now. We have Kate Hayes and a troop of Italians here giving concerts. I have not been as yet, as the tickets are too high for me, twenty rupees being the price of a single ticket.” Image courtesy of the South End Historical Society. 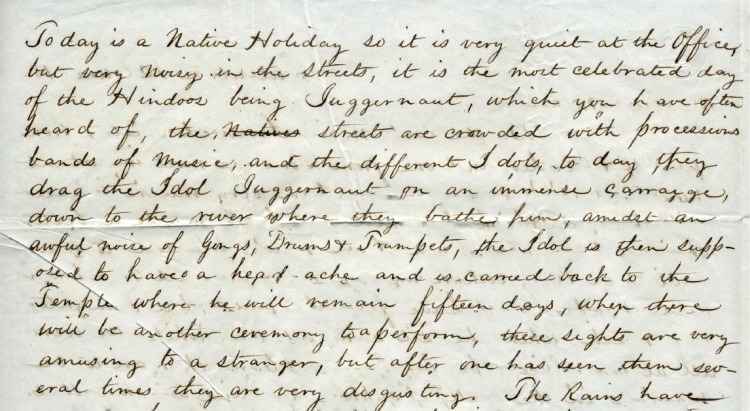 6 June 1854: Today is a native holiday, so it is very quiet at the office, but very noisy in the streets. It is the most celebrated day of the Hindoos, being Juggernaut, which you have often heard of. The streets are crowded with processions, bands of music, and the different idols. Today they drag the idol Juggernaut on an immense carriage down to the river, where they bathe him, amidst an awful noise of gongs, drums, & trumpets. The idol is then supposed to have a head-ache and is carried back to the temple, where he will remain fifteen days, when there will be another ceremony to perform. These sights are very amusing to a stranger, but after one has seen them several times they are very disgusting.” Image courtesy of the South End Historical Society.

20 March 1856: “Today is a native holiday and the natives are amusing themselves by throwing a red powder and dirty water on each other and making a horrid noise with tom-toms, fiddles, gongs, and singing. Really this is a strange country!” Image courtesy of the South End Historical Society.

Although Otis Blake enjoyed a rich social life while in Calcutta, he by no means acclimated himself fully to his surroundings. He observed Indian traditions with awe, confusion, and downright disgust but nevertheless he reported what he saw to his parents back in Boston. In the next section, we will explore Otis Blake’s death in Calcutta and the epidemic of cholera that took his life.

Next: Death Abroad: Cholera Among Merchants