In the 1850s, it was common for Irish servants working in the houses of Boston’s upper and middle class. Irish girls emigrated to America because after the potato famine, Ireland held nothing but poverty for them. Landowners found it was more profitable to turn their land to pasture and evicted their tenants, leaving thousands of Irish with no home or vocation. Many, with only enough money in their pocket for boat fare, set off for Boston. In 1849, Boston became home to 28,917 immigrants, most from Ireland. By 1855, 500,000 Irish called Boston their home. With few skills, Irish immigrants worked unskilled jobs. Irish men worked as waiters and dock workers, while the Irish women found jobs in domestic service. America gave Irish women a chance to earn money and many came with jobs already in place through their friends and relatives who had already immigrated. The young Irish women knew there was a demand for domestic servants and native born American girls did not want the job.

Despite the long hours, Irish women preferred domestic work because servants usually had a room in the house by themselves or shared with only one other girl. Without worry of paying rent, Irish servants could do with their earnings as they wished. They could send some home, save some, and spend some on amusements for themselves.

Unlike religious leaders in Ireland, Irish leaders in America discouraged marriage for the young female immigrants because it would prevent them from earning wages. Most domestic servants left their employment once they married to settle into a domestic life, something their mistresses did not want because it meant replacing a well-trained servant with an unknown entity.  In August 1855, Elizabeth Everett wrote of her shock and dismay to Otis Blake when she learned that their cook, Esther, married while the Everetts were on vacation in Nantasket Beach.

August 1855: “Oh! I forgot to tell you that we have had a wedding in our family since I left home. The week after we left home Esther was married. I never suspected even her intention of ever marrying[…]” Image courtesy of the South End Historical Society.

“[…]into the state matrimonial but she said she thought she had worked out long enough and had better be married to somebody; that she had offers from three “fellars” the 4th of July, and as this one seemed to be strong and healthy, she took him that she guessed he was clever. I told her she was foolish not to wait until I got home as I should have given her her cake, but she said that Father Lynch was going away and her “fellar” said they would be married then, and put off the wedding until I got home. She has promised to stay until I return, when I shall have the felicity of inducting her successor into office.” Image courtesy of the South End Historical Society.

Mistresses like Elizabeth Everett once again took their cue on how to deal with their Irish servants from Godey’s Lady’s Book. They believed they had a responsibility over the character of their servants because their innate “Irishness” made servants incapable of reforming themselves. Godey’s taught the mistresses to rule over their servants with a firm hand to keep the rebellious nature of the servants in check, but also learned how important it was to reward their servants for performing their jobs properly. Despite her dismay at Esther’s marriage, Elizabeth eventually rejoiced in her servant’s happiness and sent off to housekeeping with tokens of appreciation from the family.

30 September 1855: “Esther has gone to housekeeping on Meander Street, near Dedham St. and we have furnished her room splendidly from our clothes room with fancy chairs and venerable washstands[…]” Image courtesy of the South End Historical Society.

“[…]and buckets that save you the trouble of putting on a cover. Zip [the family dog] gave her a 10 dollar gold piece, and Mary Louisa gave her half a dozen silver spoons. So I expect she will take quite an aristocratic stance on Meander St.” Image courtesy of the South End Historical Society.

Popular culture and nativist sentiment made the advice Godey’s gave to middle class mistresses seem necessary. By 1850, newspapers, magazines, and novels had begun to popularize the figure of the “Biddy” in order to construct a common stereotype of laziness, ignorance, and insubordination that came to characterize Irish domestic labor. Middle class women used this figure of Biddy to keep the Irish as the “other” and help them align their domestic governance with the broader goal of transforming Irish immigrants into useful members of society. South Enders like the Everetts saw the beginnings of Irish immigrants moving in droves to their neighborhood and feared the outcome. When a neighbor rented the Chickering Piano Company’s warehouse and turned it into apartments close to the Everett’s home, Elizabeth complained to Otis Blake that the intention was to rent out to Irish immigrants:

29 May 1855: “The neighbors on Franklin Square are all in an uproar because Warren, the policeman, has hired Chickering’s large building on the side next the burying ground and intends fitting it up to let out to Irish. Some of the folks have adverstised their houses to sell and some of them are in sharp controversy with Warren[…]” Image courtesy of South End Historical Society.

“[…]about his right to annoy them so. He says that he has a good a right to an honest living as they have, and if he can gain it in this way they cannot blame him that he has no wish to molest them, but has openly and honestly hired the building and no one can blame him for making the most of it.” Image courtesy of the South End Historical Society.

Elizabeth Everett was not the only one dealing with problem servants. Otis Blake wrote so often to Elizabeth about his Indian servants in Calcutta, that she often wrote back with words of advice as to how to handle them. She must have recognized that her Irish help were more obedient than Otis Blake’s Indian servants because she joked with him in a May 1855 letter that she should send him Irish servants. 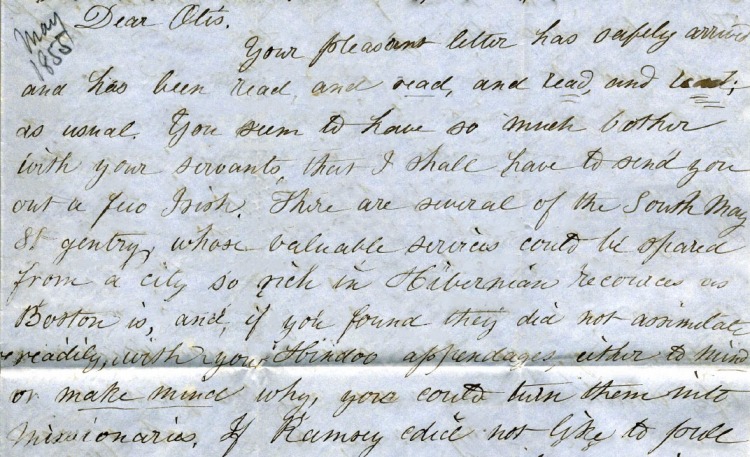 May 1855: “Dear Otis, Your pleasant letter has safely arrived and has been read and read, and read, and read; as usual. You seem to have so much bother with your servants, that I shall have to send you out a few Irish. There are several of the South May St. gentry, whose valuable services could be spared from a city so rich in Hibernian resources as Boston is, and if they did not assimilate readily with your Hindoo appendages, either to mind or make mind why, you could turn them into missionaries.” Image courtesy of the South End Historical Society.

All servants in India were men and landless laborers and American merchants living in Calcutta took their cues about how to treat Indian servants from the British, who had created an image of the Indian servant class. Domestics were dispensable to the merchants and they often wrote at great length about their servants in their correspondence to their family, especially to their female family members. Female family members often commiserated and offered advice as to how to deal with unruly servants.

But there were big differences in how domestic servants in India behaved and worked from the Irish servants in Boston. Indian servants performed specialized tasks and one person performed a task that could only last an hour or two. Upon completion, the servant would rest. This was perceived as being lazy by the American employers who were used to having servants work from early morning to late evening with few breaks. Otis Blake seemed to expect his servants to work long hours and abandon their normal style of working. During a particularly hot dry season, he hired two servants to pull the punka, a large swinging fan, over his bed all night in order for him to sleep comfortably.

Indian servants were seen as inherently criminal who would steal from their employers and carried disease into their employer’s homes. They were often called “dirty” and “immoral” because it was believed they took bribes, sold their stolen goods, and cheated their employers when dealing with other tradesmen. Unfortunately, beating Indian servants was common among the British and American merchant employers. Employers used ropes and canes as a form of chastisement and many issues of the Calcutta Gazette in the 1850s were filled with advertisements for runaway slaves and domestic help. Otis Blake wrote several times of beating his servants for suspected theft and laziness.

12 July 1854: “I still like housekeeping although we have some trouble with the servants. Last Sunday, my boy told me that my horse had not been groomed, I went out and found my Lyce [groom] drunk, he was rather saucy, so I have him a good thrashing and put him out of the yard, he came back soon after[…]” Image courtesy of the South End Historical Society.

“[…]and was rather noisy. I got a little excited and gave him another thrashing and turned him off, and then gave the derwan [government official who negotiated trade with the East India Company] a thrashing for not putting him out of the yard. This is all the trouble of any amount I have had. These natives are perfect beasts, and I hate the sight of them.” Image courtesy of the South End Historical Society.

7 February 1855: “[…]I am tired & worried half to death by these beastly servants and have a great mind to do all my work myself. One of them stole my diamond ring, which D.M. & Co. gave me worth some Rs 330 [300 rupees] – I gave him a good thrashing but as I could prove nothing against him had to let him go, I wish I could get some servants out from home.” Image courtesy of the South End Historical Society

7 March 1855: “I am worried half to death by my servants, about a month ago I lost a diamond ring, add last night I missed 13 rupees from my desk at the house and sent my bearer to jail this morning. These natives I believe are the greatest rascals in the world. My young lady friends advise me to get married so to have someone to look after the house and keep the servants straight while we are at the office.” Image courtesy of the South End Historical Society.

Otis Blake wrote so much about beating his servants that Elizabeth wrote back and asked him “but pray don’t whip your ‘help,’ for good house keepers never do” in her letter from September 1854.

Next: The Anthony Burns Case of 1854 Through the Eyes of Elizabeth Everett