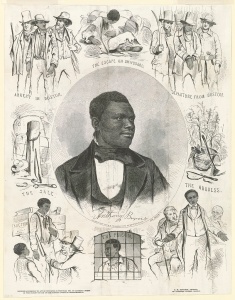 The rendition of Anthony Burns back to slavery was one of the most contentious and dramatic fugitive slave cases seen in Boston. Burns escaped slavery in Virginia by boarding a ship to Boston where he found work in a pie company and a clothing store owned by abolitionist, Lewis Hayden in March 1854. Only a few months after his arrival, Burns was seized by agents working for his master and brought to the courthouse under the Fugitive Slave Act of 1850.

Abolitionists and the Vigilance Committee gathered forces to storm the courthouse, as they had done for Shadrach Minkins in 1851, to free Burns two days after his arrest. Their attempt failed but did not deter abolitionists. Crowds gathered on the streets of Boston after Burns defense attorneys could not stop Burns’ return to Virginia. Some 50,000 protesters shouted “Shame! Shame!” at authorities escorting Burns to the ship that awaited him.

While Boston was considered the hotbed of abolitionist sentiment, not all residents supported the movement. Many merchants and mercantile families had strong ties to the South’s industry and feared what effect emancipation would have on their livelihoods. Edward Everett, Massachusetts Senator, former Massachusetts governor, former President of Harvard University, and cousin to Otis Everett, was notoriously silent on the fugitive slave laws and the Anthony Burns case, despite speaking against the Kansas-Nebraska Act. He wrote to Jane Anthony Eames in a private letter only that “Conservative feeling [is] utterly….crushed out.” Everett was alluding to Eames of how many he knew, old-fashioned Whigs, had woken up to the rendition case and became staunch abolitionists.

As for the Otis Everett’s, Elizabeth Everett was the only family member to remark on the Burns case and the subsequent turmoil in Boston. She wrote in her 4 June 1854 letter:

4 June 1854: “The past week has been one of much excitement on account of the trial of a fugitive slave, and the city authorities increased the excitement ten-fold by their preparation to prevent it. Not content with our police force and the city military, they sent to the navy yard and to Portsmouth, and to Newport, for the United States troops, and for a week the city has been full of soldiers, and of country people who, hearing that the city was under military law, flocked in from all quarters to learn the cause. The slave was returned to his master last Friday. He was marched down State St. at 2 o’clock, preceded by […]

“[…] the United States troops with a loaded cannon, and the streets were cleared and guarded by the city military, to the great indignation and annoyance of the citizens who could not attend to their business, not being allowed to pass through the business streets without being stopped by some soldier with a loaded gun or pistol. People who never cared a farthing for the slaves before are now all indignation at our orderly city being put under marital law and the business of every merchant being suspended that Mr. Suttle might have his slave, and have gone with one accord and signed a petition for the repeal of the fugitive slave law. The Mayor has altogether overstepped his power, and has made more converts to the anti-slavery cause than they could have done in a hundred years. I expect there will be no end to the law–suits growing out of it, between the citizens and soldiers, for they were ordered back on State St. as they were quietly  going to the banks on their usual business in “change hours,” and this indignation is loud and strong. You will […]” Image courtesy of the South End Historical Society.

“[…] probably read the accounts in the papers, but they will give but a faint idea of the real excitement. All has settled down now and the city is as orderly as usual.” Image courtesy of the South End Historical Society.

In a follow up letter on 18 June 1854, Elizabeth remarks that one of the South End’s Unitarian ministers was arrested for his participation in the Burns rescue efforts. “One of our Unitarian ministers, Mr. Higginson, who married a daughter of Dr. Channing was arrested last week aiding and abetting in the slave case, and will probably be sent to state prison. As he is highly connected in Boston, much interest will be felt in his trial, which takes place next month.”

Although it is hard to tell tone in a letter this old and Elizabeth does not much interject her thoughts on the subject, it does appear that Elizabeth Everett does not sympathize with fugitive slaves, or more likely, northern abolitionists. With her husband and two of her sons involved in the merchant business, it is not a surprise that Elizabeth Everett would not take up the cause of abolition. Slavery may have been outlawed in most Northern states by 1854, but commercial urban centers like Boston had a stake in southern slavery. With the invention of the cotton gin, the north was supplied with a surplus of raw cotton which was turned around in northern mills for export. Elizabeth Everett, however, was probably more affected by the commotion in the streets rather than the possible economic impact, evidenced by her 4 July 1854 letter where she comments on an anti-slavery picnic held by Massachusetts abolitionists in which William Lloyd Garrison burned a copy of the Fugitive Slave Act, a copy of the court decision in the Burns case, and a copy of the US Constitution. Elizabeth describes the streets so “full of rabble that we feared we might get in other company than we wanted…”